Designing a social Enterprise on businesses model canvas : applying the Finnish after-school club concept to a social business in Latvia 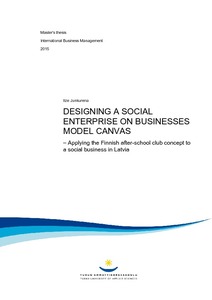 The aim of the research is to look at the concept of social entrepreneurship from a very practical standpoint by using the Business Model Canvas as a practical tool to outline its key elements and characteristics, which later can be applied to create a social business.


The thesis consists of three main parts: the first one overviews a theoretical Business Model Canvas of a typical social enterprise by reviewing literature and public documents related to the topic. The second part looks at the Finnish after-school club for children as part of the Finnish educational system and compares it to the social entrepreneurship concept. The third, creative, part applies the first two in order to create a BMC for an after-school club in Bauska, Latvia, in the form of a social-business.


The research is started with a hypothesis “It is possible to redesign the Finnish after-school club for children as a social enterprise in Bauska, Latvia” which is not approved during the research after using a customer survey in Latvia and observing an after-school club in Turku, Finland. The idea of implementing a Finnish style afternoon club in Latvia is not viable due to cultural, economic and legal differences between the two countries.