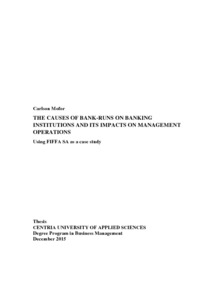 Acknowledging that bank-run is one of the most dangerous thing to happen to a bank as banks in our society continuously face such problems as a result, at times leads to a fall of the bank, causing problems for the government to control the monetary policy of the economy and also loss of confidence and trust in the country’s banking system. The main objective of this study was to find out the extent to which insolvency can lead to bank-run. The research was also to find out the effect of loss of customer’s confidence on the bank and the effect of rumors from the general public on the bank.
Considering the problem, some suggestions were provided in chapter six. The work is presented in six chapters. Chapter one is the general introduction, chapter two is all about related literature and chapter four is the background of study area FIFFA SA KUMBA and research methodology. Chapter five is presentation and data analysis and chapter six is summary of findings and recommendations.
It was noticed from the research conducted that loss of customer’s confidence on a bank has a negative effect on the bank as 90.7 accepted the view. It means that if customers lack confidence on the bank, they may demand rapidly for their cash hence leading to bank-run. Banks should keep adequate liquid as a way of meeting customer’s needs at all times thereby maintaining the trust of the customers on the bank. Actually, most banks do not like to hold mush cash because it conflicts with profitability which is the principal objective of most banks as they want to maximize profits at all cost.