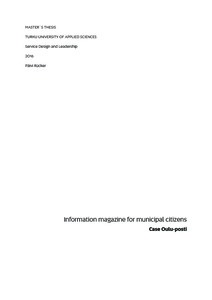 This study is about developing the Oulu-posti magazine. Oulu-posti is City of Oulu´s information magazine in which it informs the municipal citizens about city services and other information related to the City of Oulu. The study aims to identify how the Oulu-posti magazine can be developed so that it would serve the needs of the City of Oulu and its residents better. The study aims to gather information about the media reading habits of Oulu residents and the effects the increasing digitalization has. The idea was to study what else a magazine could be than a printed product.

In this study a survey was used as one of the methods to determine what readers thought about Oulu-posti and how they would develop the magazine. The survey was conducted at the beginning of 2015. eMedia 2014 research, which studied how Finns use media, was also the base of this study. Benchmarking, interviews, service blueprinting, creating personas and brainwriting were used to gather information from people in the service area.

The conclusion of the survey was that Oulu-posti needs developing; some target groups need more attention, topics that need to be covered and the delivery of the content must be developed further. According to eMedia 2014 study different people use different media types, and different media channels should be considered in order to have readers attention. All media channels must be considered if the need is to serve and inform residents and be easily accessible.

Together with Otavamedia asiakasviestintä and City of Oulu tangible ideas were created to develop Oulu-posti. The main suggestions were examined: redesign of site map, active use of social media, supplement for the elderly and a plan of multichannel content delivery. Implementations will be conducted at the beginning of 2016. After the implementation new feedback will be required to see if the design is actually working. The magazine development process is never ready but is rather a continuous process that tries to respond to the needs of the readers´ and service providers´.