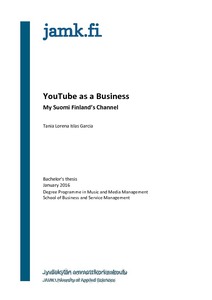 The reason for the thesis was to comprehend the variables and methodologies that make a YouTube video grow on the web. YouTube is the second biggest search engine in the world and video sharing has become the most important way of Social Media communication. The evolution of social media platforms have created new business models that benefit small companies and content creators and due to these phenomena new influencers are discovered every day.
Exploring the different tools and strategies that can be used for starting a YouTube channel and engaging with the viewers is important when creating a YouTube channel. The study of this thesis was conducted by using My Suomi Finland´s video blogs focusing on explaining Finnish topics and culture facts to foreigners.
The length of the project was two years and it was a successful project that reached all the goals that were set. During the project its producer discovered that regardless of the different strategies that there are for making successful videos and successful social media campaigns the results will always be different with each project. The study also discovered that a good topic in a video can be as important as any good SEO (Search Engine Optimization) configuration, since creating conversation on a video where people are going to go back to engage in a new discussion can be as potentially popular as the one with a bigger investment in SEO or storytelling or with an education purpose.
The conclusion states that great success can be achieved by using simple topics of interest and free Social Media platforms. My Suomi Finland accomplished more than expected during the creation of the project. In the future the channel will keep growing by itself as there is already a fair number of videos that keep themselves up and maintain the traffic.