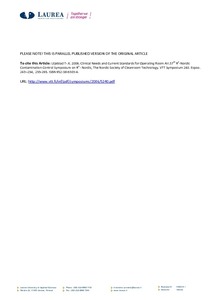 The purpose of this presentation is to introduce some of the current Finnish and international standards for operating room air and critically discuss their implications to aseptic practices aiming to minimize particle dispersion during operation. The criteria for aseptic practice recommendations were created by method of critical incidences by analyzing 18 h of videotaped material including whole time particle count by laser-sampler (VTT, Tampere) in laminar flow paediatric operating rooms. The inductive analysis of the data was divided into three sections 1) the preparations for the operation, 2) the creation of the sterile field, 3) the maintenance of the sterile field. The research findings brought one section more: 4) the discharge of the sterile field. Less incidences causing particle dispersion were found during creation of sterile field than other sections. During the maintenance of the sterile field, the causes of dispersion were 1) handling the items in the sterile field, 2) invasive and 3) non-invasive interventions during the operation and 4) the action of non-scrubbed persons around the sterile field. The amount of particles varied in operations during the discharge of operation. The incidences were tested also by rotated explorative factor analysis (FA) with Maximum Likehood Method aiming to decrease the number to critical ones. FA strengthened the result of inductive analysis, decreasing 21 incidents to 9 critical ones. The detailed recommendations were reasoned by international evidence. This piece of research will be used in different clinical contexts to test a conceptual model of clinical aseptic practices to be used in perioperative education, research and clinical quality development.