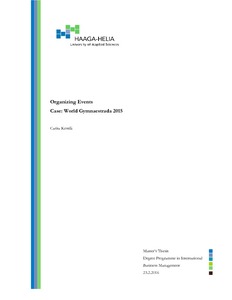 The objective of the study is to plan, organize and implement a successful Thank you event for the trustees of World Gymnaestrada 2015 in Helsinki. The World Gymnaestrada is a world-wide, non-competitive “FIG Gymnastics for All” event held every four years in different countries and attracting the largest number of active participants of any FIG (Fédération internationale de gymnastique) event. Participation is for everybody, regardless of gender, age, race, religion, culture, ability or social standing. In July 2015 the World Gymnaestrada was held for the first time in Finland, and was in terms of international participants the largest event ever held in the country. It was honored as Finnish Sport Event of the Year. The World Gymnaestrada 2015 Helsinki was a seven days lasting gymnastics festival, where approximately 25 000 participants from 50 different countries took part. There were 27 locals who were working as trustees for the event to make it happen, without getting paid for it. As an acknowledgement for their valuable work they were invited to a Thank you event August 29, 2015 and the researcher of this thesis was the one to plan and organize the event. The event ended up consisting of a brunch session, an activity part, a festive lunch including a high class competitive dance performance. All this needed to be done within the given budget set by the Finnish Gymnastics Federation. The theoretical framework concentrates mainly on Events and Event Management. The researcher goes through operations such as analyses, planning, implementation and evaluation. The study was executed in the form of a case study using a very practical approach. Data were collected through email correspondence and web pages. The researcher studied and looked for different kind of possibilities for restaurants, activities and performances. The following step was to execute the plan and make sure all the practicalities run smoothly. The analytical approach was qualitative. In conclusion, this study leads to successful event planning and the practical outcome of the study was the implementation of the plan which occurred in the form of World Gymnaestrada
2015 Thank you event in August 2015.