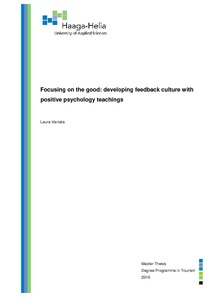 The aim of this research was to develop feedback culture. The work was commissioned by a company within aviation industry. An earlier study that was conducted for the commissioner showed that there was a need for improvement in giving and receiving feedback. This project was a part of commissioner’s larger development work to unify leadership practices in its operational departments, and to build a foundation of positivity to the organization. It was scoped to cover the company’s middle management.

This study is a development work. Training was used as a tool for development. Training was designed and coached to commissioning company’s superiors. Various methods were used in evaluating the trainings.

The theoretical framework of the research presents an overview of positive psychology, and its theory of virtues and character strengths. The literature review considers the theory in leadership context. The theoretical framework also introduces the concepts that relate to feedback culture. The focus is in leadership and applying positive approach in it.

Training was designed to interactive sessions that combined theory and practice. Various methods were used in the trainings. Short theoretical introductions were followed by group work assignments that utilized participatory methods. Introductions were based on the theory presented in the literature review.

Training was successful and benefitted the commissioner. Positive development was seen in the superior’s work right after the training. As a result of the development work, training was coached also for company’s top management and four staff weekly meetings were facilitated with similar agenda. Positive psychology is a current phenomenon and its teachings are well applicable in leadership training. An outsider coach benefits organizational development.