Guidelines for Finnish start-ups on how to utilize crowdfunding 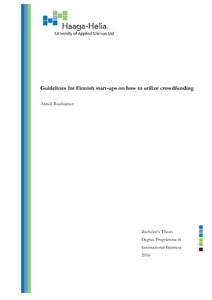 GOODBYE THESIS AND GOOD LUCK WHEREVER YOUR JOURNEY MAY TAKE YOU.pdf (2.482Mt)
Lataukset:

This thesis aims to show how a Finnish start-up could benefit from crowdfunding.Other funding methods are explained shortly in the beginning and the rest of the
thesis focusing on crowdfunding.
The current Finnish legislation does not yet include anything aimed directly at crowdfunding, but a proposal is to be presented in spring 2016 to the ministry of Finance.
There are some crowdfunding websites operating in Finland, including Mesenaatti.me and Invesdor.com. Other more popular websites operate in the US – Kickstarter and Indiegogo. The latter has some great Finnish crowdfunding companies, which are used to give example about how to make your campaign a success.
The successful examples used are Iron Sky: The Coming Race movie, BubbleCap carbonating product, CoFounder magazine all funded on Indiegogo and Yoogaia live online yoga service crowdfunded through FundedByMe.
The not so successful cases (raised 2-3% of goal funds during the campaign) include Caddieye golf range calculating app and device from Invesdor, XMASQuest24 interactive Christmas calendar website from Indiegogo and Jurase Park dinosaur theme park to be built in Vantaa, which was to be raising funds through GoFundMe.
The most important do's and don'ts were gathered to make guidelines for start-ups to use. Some of the advice gathered includes making a plan for both the business and the marketing of the campaign. The examples clearly showed that visibility is helpful if the project to be funded has put effort into their marketing.
The don'ts are partially opposites of the do's, but also include giving a reliable impression to the viewer about your project and campaign.