Design goes Indonesia - or does it? : Case: Magisso 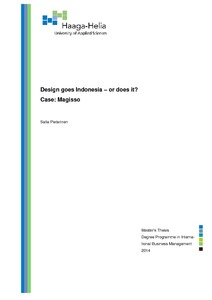 This is a qualitative case study exploring one of the so called emerging markets, Indonesia, through the lens of a small Finnish design company. The study particularly examines the implications of the growth of the economy and the shifts in the consumption habits of the middle-class population. The phenomenon is expected to open routes for foreign companies that have products and services to meet the expectations of the population. However, the route to the market is not simple. Based on analysis of the collected data, the final objective of the study is find ways that can make the market entrance feasible and the case company’s operations successful.

This report extends the understanding of the phenomenon with three more specific objectives. The first one is to make sure that the business environment in Indonesia is favourable for the market entrance. In order to give a more practical perspective, niche markets are identified and marketing tools are seen effective introduced. Secondly, as networking is considered a highly valuable business activity that can have a remarkable impact on the success this study aims at finding local organisations that can serve as sources for more detailed information and offer fruitful cooperation. Finally, the study evaluates the potential of the B2B and B2C markets separately.

Because social context and behavioural factors are seen significant, the study takes subjectivist and interpretivist viewpoints. The secondary data was completed with primary data collected during a field trip in Jakarta. Primary data consists of five interviews and observation in four selected shops. Two personal correspondences supported the analysis of the findings.

The findings reveal that Indonesia’s middle-class offers an enormous market potential. Private consumption among the middle-class population is growing which can be witnessed in various business sectors. Even though the local government is streamlining its bureaucracy related to foreign trade, its high level of protectionism, particularly SNI procedure, can be considered a serious setback. The potential of B2B market is considered bigger even though the observation reveals at least one opportunity in the retail sector.