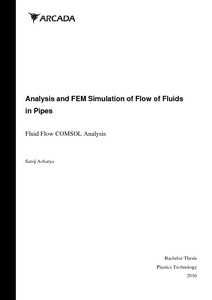 Firstly, the experiment is performed in Arcada Laboratory for fluid flow in a pipe. From the experiment, volumetric flow is calculated with the help of analogue flow meter. This makes it possible to calculate the average velocity of fluid in a pipe. Later, the Reynolds number was calculated to determine the type of flow and that is found to be a turbulent.

Secondly, the backstep geometry tutorial of Navier-Stokes incompressible fluid flow is solved in simulation software COMSOL to know the path of simulation. So that, fluid flow performed in the laboratory is done based on that tutorial.

Lastly, the turbulent flow simulation is done by modelling the same pipeline as of labora-tory experiment using standard COMSOL. After the simulation, different velocity and pressure is observed according to the position of pipe during the flow.