Fertilization success and gamete viability of the Pacific oyster (Crassostrea gigas) across a salinity gradient. 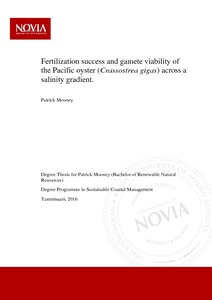 Anthropogenic climate change has, and will continue to, exert its effects on aquatic environments. Among these, changes in salinity levels, especially in high-precipitation regions such as the Swedish west coast, may affect the survivability and spread of some species. The Pacific oyster (Crassostrea gigas), an invasive species recently arrived in Sweden, is likely to be affected by decreases in the salinity content of coastal waters. In order to test this, a fertilization experiment was carried out to test both the longevity and viability of oyster gametes across a salinity gradient. Triple-parent crosses were run in five different salinities. These included the local environment’s minimum, maximum, as well as below-minimum salinities. The results show that gamete exposure to hyposaline waters adversely affected their viability, represented by lower fertilization success. The proportion of fertilized eggs was not negligible at the lowest salinity, albeit still significantly lower compared to that of the other salinities tested. While still warranting further studies, these results suggest that the Pacific oyster is capable of reproducing in less saline waters than its current range in Sweden denotes. Because the invasion into Swedish waters is fairly recent, it is not yet known what the future spread of the species will be. Results from this experiment point towards a possible northward range expansion.