Big data in the marketing of Finnish B2C companies 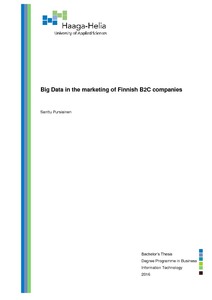 The goal of this research is to examine the current state of big data used in the marketing of large Finnish B2C(business-to-consumer) companies. The research attempts to analyse whether these companies apply big data technologies in their marketing, and create a generalisation of the current status of the technological advancement on the given sector.

The subject itself is current and is being examined and utilised widely throughout the globe. Different studies are being conducted simultaneously, and the race for the winning solutions is obvious.

The report uses two different studies as a foundation for its base assumption on evaluating the situation and based on them, creates scenarios for the plausible outcome. The scope of the research is limited to non-technological features of big data usage among the participating companies. The report investigates how the companies are using and benefiting from big data in their marketing, and what kind of downsides or disadvantages it possibly brings to the business. Also the level of big data usage has been examined, as well as interviewees´ opinion whether the companies are satisfied with the current level.

In order to validate the assumptions, information gathering for the research was performed by interviewing companies using both quantitative and qualitative methods. The interviews were conducted in person or by phone. The main consideration for the interview method was to conduct it verbally, not as a questionnaire. The interviews were held with people in the organisation with a significant competency in marketing and their utilisation of big data, initially targeted at marketing managers.

The conclusion of the study is that large Finnish B2C organisations are, in fact, using big data in their marketing, some more than others. One of the main benefit of big data usage among the participants was creating better targeted marketing. The outcomes of the research also reveal that using big data in marketing, the companies have a good general knowledge of their loyal and regular customers, but most of them lack the information of their occasional customers, or cannot utilise the information they have. This is mainly due to legislation restrictions and privacy of the consumers.

As a conclusion, the report states that big data is still an evolving technology in Finland which has been in practise for a relatively small period of time. All of the interviewed companies stated that they have room for improvement in utilising the technology, and would do so in the future.

Every respondent variably noted that the future would change the usage of big data and predicted the likely increase in its use. The respondents agreed that new technologies and new ways of using data will be introduced and discovered.