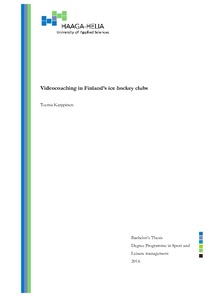 This bachelor thesis is a study of video coaching in ice hockey in Finland and how it is implemented. Objective is to find a model that the coaches can use in video coaching on a daily basis.

The first part of the thesis is a theory part that goes trough the teaching and learning process. It includes theoretical knowledge of how to teach, how people learn effectively, the various forms of feedback and how the feedback should be given. It also discusses motivation and its influence in learning.

The theory part also goes trough video technology, and the tools it offers along with their utilization.

The second part of this thesis is a research that examines the level of video technology usage among Finnish ice hockey coaches. The research part covers the survey, answers and the conclusions reached through the study.

The target group for the study were Finnish national team coaches, Liiga, Mesti, A-jr SM-league, B-jr SM-league and C-jr SM-league coaches. Study was implemented with eletcronic survey that was sent to the coaches via email.

The results show that Finnish ice hockey coaches use video in multiple ways to support them in coaching. The coaches experience that video has value to themselves, but also to the players and it is a great tool for developing both indivudual and team skills.