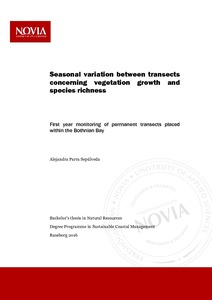 Monitoring programs have been carried out within the Baltic Sea for decades to evaluate the progress being made towards a good environmental status. Seven permanent transect were placed within the Bothnian Bay in the summer of 2015 as a Metsähallitus project; the present thesis is made for them. The transects were placed in three different geographical areas so that they could cover both the North-South-axis of the Bothnian Bay and the outer archipelago-inner archipelago-axis.

The main focus of this paper is seasonal variation between those seven permanent monitoring transects. The coverage percentage and bottom substrate of each species were monitored, this thesis does not focus on these but on the species and their seasonal variation. The method used for gathering data was SCUBA diving.

Each transect has been monitored three times except for one that was monitored four times. From the result obtained it was clear that there was a seasonal variation, the species composition and the amount of species were found to vary according to progressing growing season, according to the bottom substrate and also due to north-south –location of each transect.