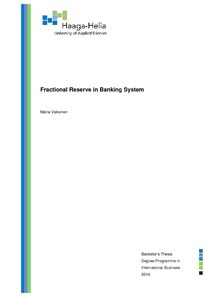 This thesis is aimed to provide understanding of the role of the fractional reserve in the mod-ern banking system worldwide and particularly in Finland.

To find answers to these questions, I studied history books, up-to-date materials and legisla-tion, especially acts published by the European Central Bank. In addition, I sent questionnaires to several banks in Finland and got examples from real bank practice, which in total helped me to form the final understanding of the role of the fractional reserve system in today’s economy.