Blackouts during navigation in narrow passages 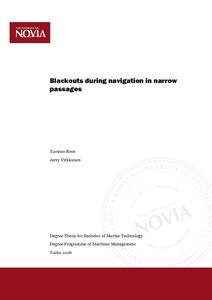 This thesis gives you the basic knowledge about the characteristics of blackouts. You will also learn how to react as an officer in a blackout situation.
The thesis consists of two parts: theory and research. The theory part will give you details on what a blackout is, details on ship electricity and emergency power sources and above all, things to consider as an officer in a blackout situation. The theory part also includes law text in an easy to understand form.
The latter part is a description of a simulator based study. 15 students completed exactly the same simulator exercise where they experienced a blackout onboard their ship. The students formed eight bridge teams which were divided into two groups. Half of the students were given a blackout checklist and the other half had to manage without it.
The goal for the research was to measure the importance of a checklist in a blackout situation. We were able to conclude that the checklist did not save the vessel from grounding but it appeared to help when performing minor tasks involved in bridge procedures during a blackout.