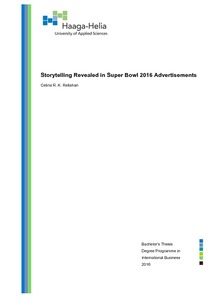 This thesis investigates the use of storytelling in advertising applications and its influence on the instigation of social activity as measured by online views and social activity generated for advertisements broadcast during the 2016 Super Bowl. The thesis aims at identifying those elements of storytelling that are found in these advertisements and relating these characteristics to the success of the promotion in terms of immediate engagement of the viewing audience.

The thesis presents an overview of the storytelling process as well as a characterisation of the features of the story according to the categories proposed by Gallo. The storytelling process is characterised using the 5-act model originated by Freytag. Communication theory for electronic media is discussed from the perspective of McLuhan to establish a theoretical framework for the way that modern advertising creates a seductive moment to capture the attention of viewers and thus engage them in participation in the advertisement. Viewer participation in the advertisements of the Super Bowl is judged based on the social consumer elicited in social media.

Empirical data were gathered from a selection of online sources and evaluated for consistency and reporting data quality. All advertisements were viewed and classified according to the theoretical model and rated according to frequency of occurrence. Statistically-based comparisons were made for audience response using 2-sample t-tests to evaluate differences between 30-second and one-minute advertisements. Finally, cost-effectiveness was judged to determine the cost per online view and cost per social action as a means to judge relative return on investment for the limited sample of data where investment information was available.