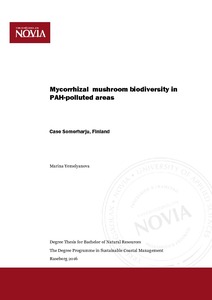 Presence of mycorrhizal fungi affects the phytoremediation efficiency on PAH-polluted soils: fungi participate in the soil bioremediation per se and, as symbionts with living trees, help the trees to survive under the pollution and other harsh environmental conditions.

This thesis initiates a study of a mycorrhizal mushroom community on the Somerharju phytoremediation project site in Finland. An inventory of the mycorrhizal mushrooms concerning mushroom abundance, species richness and biodiversity was done during the season of 2015. The distribution of the mushrooms over the site was analyzed in relation to PAH-pollution levels and tree cuttings on the site.

A significant dependence of fungal species richness and biodiversity on a cutting type was detected. The dependence of mushroom abundance, species richness and biodiversity on a PAH-pollution level was not statistically significant. Tolerance of Somerharju’s mycorrhizal mushroom community to PAHs allows expecting even emergence of the mushrooms over the site in future and opens perspectives for an intentional inoculation of such mushrooms in the areas with suitable tree coverage on the entire site for enhancing the bioremediation effect.