THE ECONOMIC IMPACT OF CORRUPTION IN AFRICA AND THE WAY FORWARD : Case study: Cameroon 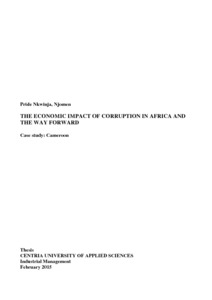 This thesis is based on a holistic approach to analysing corruption and its economic impact in Africa, using Cameroon as a case study. It seek to analyse precolonial Africa and how their justice system led to low corruption and the slave trade how slavery contributed to today’s corruption
the colonial rule how the divide and rule policies, imposed taxes etc., led to deaths, especially in the Congo, suppression of civil rights, exploitation and misery up to the 1960s, obstruction of natural pro-cess of state formations and development.
In post-colonial Africa, we seek to explore the cold war and the rise of dictators with support from the East and West, the decline of democracy and the rise of tyranny and tribal and religious conflicts; Neo-colonialism and the use of financial institutions to mingle in countries domestic policies
In Cameroon, the vast amount of corruption in the awarding of government contracts and the custom sector leading to enormous cost of doing business and tax evasion, corrupt insurance sector leading in insecurities in investments, corrupt judiciary, the police and the army, and the theft of funds for state arms and machinery, daily police bribery and unreliable justice system and the vulnerability of the poor.
The way forward seeks to propose the promotion of pan Africanism as a tool to eliminate religious and tribal conflicts, re-orientation to pre-colonial ethical norms and value to promote political goodwill and dedication to the country, strengthening anti-corruption watchdogs to facilitate the prosecution of em-bezzlers and the corrupt.
For international efforts, nations like Switzerland should change laws and make it difficult to attract money laundry and tax evasion. The nation of Cameroon should draw lessons from Finland such as a free access to education for all, freedom of speech and the press, independent arms of the government, political goodwill and dedication of service, access to law and justice, no political influence in state recruitments, openness to criticism and collective decision making.