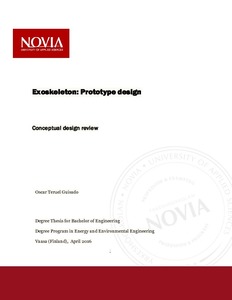 The design projected in this document has features specifications of an exoskeleton structure with loads operation finality. The entire structure is divided into three major parts: the lower body, the chest, and the arms. Each part was considered separately, and all of the parts can be assembled together to create the main structure.

In this document are collected all the corresponding designs of each element that will compound the final prototype. The lower body represents the base of the structure and supports, the weight of the other two parts and the advance, allowing them to move backwards as well as allowing rotational movement. The chest serves the purpose of a user cabin, where the operator will be placed to operate the exoskeleton. The purpose of the arms is to raise and carry loads.

Although some parts of the study could not be completed due to time constraints, the exoskeleton has been designed for a real use. A user is needed to drive the structure and for this reason an anthropometrical study was completed in order to adapt the design to a real situation.

The electrical design and the control system needed for the prototype functionality are not considered in this project. These sections could be studied at a later time by another person or team as a future complementary study for this project.

As it is a prototype design, this project does not consider any law or design legislation. Additionally, no health and security study was done.