An Exploration of English Gothic: Chance and the Medieval Monarchy 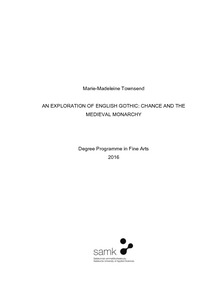 The purpose of this thesis was to explore three Gothic scripts in England, looking at the evolution from Carolingian Minuscule used for Latin into narrower Gothic, the overlay of Norman-French language and culture on Old English and increasing secularisation.
The historical context was considered in the text, in three practice books.
Part 1. Gothic scripts examined.
Part 2. Protogothic. A practice book in Protogothic, based on Cotton Tib. B VIII, showed the upright nature and oval profile, which retained the legibility of Carolingian,
while saving space and materials. The writing-angle is steepened to 35 degrees.Latin used frequent abbreviations and the half r, but English texts used little. There
was no ‘biting of bows’.
Three English Kings called Edward ruled between 1272 and 1377. Edward I, (1272 to 1307), a lucky and wise king, was a warrior. Successful in tournaments, when such were often deadly, after the Battle of Lewes he escaped captivity. He fought Simon de Montfort at the Battle of Evesham, where in breach of chivalry he had him executed. In expiation of sin, he went on Crusade, where he survived battles and an
assassination attempt. On his way back he heard that his father died and he was King.
Part 3. Gothic Textura. Here the oval becomes the hexagonal Textura, with flattened and dished minim feet. The writing angle has further steepened to more than 55 degrees.
Textura with its angular shapes and regular head and foot serifs, made it easier to control the letter widths giving a pleasing, “woven” texture to the whole page.
Textura led to increasing compression and less legibility. The practice book, on the murder or exile of Edward II (1307 to 1327), an unlucky or unwise king, in Textura Prescissus vel sine pedibus, was based on the script of the Queen Mary Psalter.
Part 4. Gothic cursive. Anglicana/Secretary script for this practice book was based on the Ellesmere Chaucer. This hand was used for administrative documents for several
hundreds of years.
The practice book is on chance in the reign of Edward III (1327-1377), a lucky and a wise king, who survived civil war as a teenager, escaped the regency of Roger Mortimer, won the Battle of Crécy, survived the Black Death and the resulting
breakdown of feudalism.
Part 5. Artefact – “A House of Cards” – after a brief study of historic playing cards, which arrived in Britain in the late 1300’s, a model was made representing the effects
of chance on politics and survival for medieval monarchs. The writing being in all three hands studied.