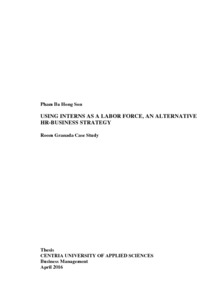 To some extent small firms implemented a wide variety of Human Resource practices, though in a less sophisticated way than larger organizations (Hornsby & Kuratko 1990). Besides, the conventional objects for Human Resource Management (HRM) were long-term employees. However, there were some researches proving that interns or apprentices could be considering center cores for HRM. In scope of hospitality industry, interns were considered a valuable competitive advantage because short-term internship periods were perfectly suitable with labor characteristics of this industry, which was seasonal and highly turnover. Besides, HR practices were partly applied in Room Granada, which was the case study of this thesis, but those practices were likely to be insufficient and non-strategic.

Therefore, one of ambitions of this thesis was to justify why an initiative HRM strategy which focused on interns was necessary for exploiting effectively the current high-quality human resource of Room Granada. Moreover, based on available academic literatures and current HRM problems in Room-Granada, the last ambition was that the author tried in building an initiative compatible HRM systems which encompassed polices as well as practices for Room Granada.

A successful thesis is proposing both sustainable theory foundation and highly empirical application. Based on that belief, this thesis was devotedly introduced.