THE EFFECTS OF STATIC STRETCHING OF THE HAMSTRING MUSCLES IN A WARM-UP ON PERFORMANCE AMONG FOOTBALL PLAYERS: A SYSTEMATIC LIVERATURE REVIEW 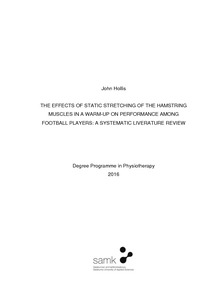 The purpose of this thesis was to research the most recent evidence surrounding the effects of static stretching among football players on the hamstring muscles, and how it affects their performance. The research for this thesis was carried out in the form of a systematic literature review. The content of the thesis looks at the importance of a warm-up including the different types, the demands of football, the anatomy of the hamstring muscles, and the differing types of stretching.

The search for free full access articles was made using three different online databases; Science Direct, EBSCO, and PubMed, and aimed to find the most recent articles since 2010. Five relevant studies were found and approved using the PEDro scale.