THE ROLE OF MERGERS AND ACQUISITIONS IN CORPORATE GROWTH AND DEVELOPMENT : Skype Bank Nigeria Plc 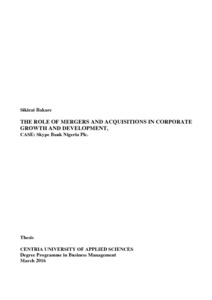 The research method used was secondary data, statistical method in which chi- square and null hypothesis was used to gain the final result. From the questionnaire admitted to the staffs of the case company, it shows that most of them are used to mergers and acquisitions in one way and another, they are sure of job secured and not afraid of merger and acquisitions. It shows that mergers and acquisitions techniques enhances organizational survival in a distressed economy, it has also limited the severity of competition by increasing the company’s markets power.