Planning and executing a promotion party for Suicide Chefs Oy 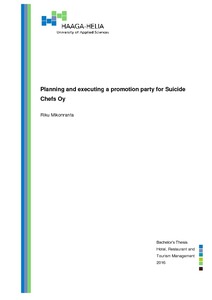 This thesis is a written report on the planning, executing and hosting a promotion event for Suicide Chefs Oy.

Suicide Chefs Oy is a starting company, founded by Haaga-Helia seniors Emil Abdullajevs and Peetu Virtanen. They plan to combine tattoo and chef cultures with an upcoming self-published book and they have a lot of other products in mind. However, what they don’t have is publicity and this is why the promotion party was held.

The thesis is constructed of literary review and an empirical part, which is the planning and executing of the promotion party. A Music show was held right after the promo, to create more value for the event. The theory part explains the most important parts of event management and customer relationship management. The empirical part tells how the promotion party was planned, how it was executed and how did the clients (Peetu and Emil) feel about the event.

The event took place 28th of April, 2016 at Bar Loose. The Objective of the event was to create awareness about the company and to meet the profitability bounds set by Bar Loose. Both the event and the music show were profitable and well liked, but the goal of increasing awareness of the company could have succeeded better.