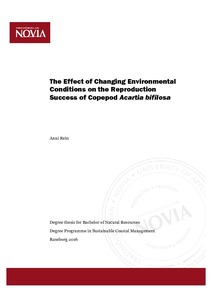 The objective of this thesis is to shed light on how climate-induced changes in the environmental conditions of the Baltic Sea, mainly pH and temperature, affect the reproduction success of copepods, specifically Acartia bifilosa. The possible changes in the egg production rate and hatching success of A. bifilosa due to climate change may affect the future plankton trophic dynamics in the Baltic Sea as it is the most abundant zooplankton species and a major food source for many species, for example Baltic herring.

The research was carried out by gathering quantitative data in a laboratory experiment in Tvärminne Zoological Station, in Hanko, southern Finland in August 2015. In the laboratory experiment, the copepods were sampled directly in the field and incubated in ambient pH and temperature conditions after which the egg production rate and hatching success were analyzed. The experiment was complemented with a description of long-term monitoring data of seawater pH collected since 1996 at Storfjärden, a pelagic area near Tvärminne Zoological Station and the sampling location for this experiment.

The results show that elevated temperature and pH had a positive effect on the egg production rate. The hatching success results indicate that elevated temperature may increase hatching rates at least when the temperature is within the optimum range for copepod. These results imply that copepods are used to adapting to changing conditions at least in the short term due to their behaviour of diurnal vertical migration. Further studies would be needed to determine if this adaptability enhances the copepods’ ability to endure the effects of climate change also in the long term.