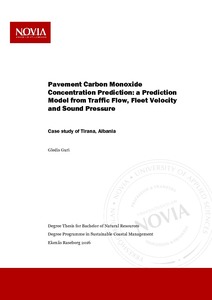 Carbon monoxide is a poisonous gas which is dangerous for human health due to the fact that it is colorless, odorless and tasteless. These features minimize the possibility for humans to detect and therefore avoid carbon monoxide. Noise is a disturbance from basically every unwanted sound in human ears and its physical feature is waves which makes it invisible by the naked eye in the air. Both pollutants are harmful for human health and occur in high concentration in urban cities since most of the mobility and thus economic activity are located there. Long term exposure to relatively high amounts of noise and CO causes severe short and long term health damages depending on the level of pollutants. Due to human inability to detect these pollutants rises a need for an understanding of pollutant behavior and pollutant sources. Therefore, this study attempts to explain the behavior of CO and noise pollutants, at breathing zone on the pavements in the urban areas of Tirana, Albania caused by automobiles passing on the road beside the pavements. The study shows a strong dependency of pollutants from fleet velocity and traffic flow and low amounts of pollutants when the road is wide and located in an open area with no barriers alongside it. Meanwhile when the road is narrow and located in a sheltered place with building barriers aside it, pollutants do not have a dependency with fleet velocity but only with traffic flow and the concentration amount of pollutants is high.