Designing lego brick and its mould for manufacturing 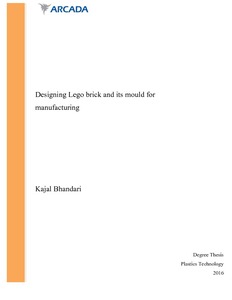 The Lego bricks are a creative and fun way to create anything that a person can imagine. The objective of the thesis is to find what kind of mould is suitable for production of a Lego brick and how the mould works in an injection-moulding machine. This thesis concerns how to use SolidWorks, designing a mould for Lego brick that has the possibility of producing the product. A detail study of the product, its design and designing of the whole mould. This project gives the clear idea of the process for mould designing and its production. The parts of mould are simulated separately in Mastercam software. Mastercam software helps produce g codes that are feed into CNC machine for machining the core and cavity of the mould.
This thesis concerns the theory of mould designing and SolidWorks software. The designing is done in two separate ways, making all parts separately and using mould tools. Mould tools are the features in the software SolidWorks that creates mould from the part itself. The created core and cavity are 3D printed to be clear about the design, size and how is it going to look in a real mould. In theory after Mouldflow and milling process an electro discharge process should be carried out in order to get the proper shape of the part.