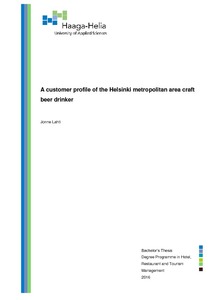 This thesis aims to answer the question of who is the average craft beer consumer in the Helsinki metropolitan area. This is done with a quantitative research in the form of a questionnaire which was executed from December 2015 to March 2016. Justification of the topic lies in the current growth of the craft beer sector in Finland. There were 286 respondents to the questionnaire: 255 were qualified for analysis.

The theoretical framework of the thesis consists of explaining beer as a beverage: its elements, how it is made, a brief history and its main categories. After this, a definition of craft beer follows, it is compared to big brewery beer and a look at the restaurants in the area and craft beer consumers in Finland, Europe and North America is taken. Finally, the theoretical framework goes through consumer research as a process and its limitations, with an additional part on attitudes, which the questionnaire also gauged.

The empirical part of the work explains the methodology, shows the questionnaire design and continues with looks on the data collection, further justification of the work, the validity, reliability and limitations of the work, finally considering ethical questions in the research.
Results, analysis and discussion follow. They conclude that the hypothetical mean of a craft beer consumer in the Helsinki metropolitan area is predominantly male, in his thirties, having higher education and earning quite averagely. He drinks beer several times a week, with the amount being under 3 litres – however, not all of this consumption is craft beer. The place of consumption can be either a restaurant or at home, but the selection of beers available is the main reason for this. The reasoning for drinking craft beer is taste first, but the distinctiveness of craft beer and the variety of styles available is important.

However, considering the sample was a convenience sample, the work refrains from making generalisations to the general population. However, with 255 answers, it is argued that whereas not generalizable, the work still gives directorial answers to the research question. The research question is divided to 12 subquestions, out of which 9 were answered within the sample.