Optimization of struvite production from urine 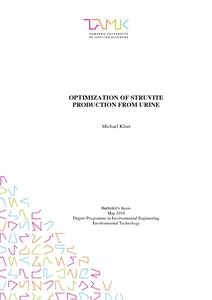 Artificial fertilisers are essential in modern-day agriculture and food production, providing the necessary nutrients for intensive production and crop growth. Phosphorus is one element that is of special importance in fertilisers as its natural cycle spans over millions of years, essentially making it a finite resource. The majority of phosphorus fertiliser is derived from phosphate rock.

This study researched urine as an alternative phosphorus source for fertiliser purposes through the precipitation of struvite (MgNH4PO4·6H2O). The main aim of the research was to find the optimal parameters for struvite production, using a series of different variable level combinations. These variables were mixing time and magnesium to phosphorus ratio (Mg:P). The tests were carried out in batches using a pilot struvite reactor at Tampere University of Applied Sciences during April and May 2016.

Results indicated that both longer mixing times and a higher Mg:P ratio have adverse effects on phosphorus removal rates. Phosphorus removal rates varied throughout the experiments, while the amounts of precipitated struvite remained roughly the same. There-fore, the combination that removed the most phosphorus and used the least amount of resources was chosen to be the optimum: 5 minutes of mixing using a Mg:P ratio of 1.1.