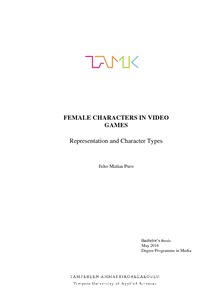 In the recent years there has been a large social movement to indicate different problems in society and culture, whether it is unequal representation, sexism, racism or prejudices, aiming at a more broad, open culture with improved equality on all fronts. Inspired by this movement, the purpose of this thesis is to take a critical look at how women are represented in modern Western video games, and give a summary of the problems.

The thesis looks at the most prominent subjects, such as numerical representation and how video games represent female characters, using concepts and terms such as the male gaze and male as norm. The aim is to give a broad look at the overall situation. The focus is also put on different female character types, representation of sexuality and gender traits, with numerous character examples. The main method of evaluating the current state is data collecting, comprising of numerous articles, books, studies and lectures, as well as the thesis author’s work history as a reviewer of video games and video game industry.

After evaluating the current situation, the thesis also includes a game project called Roar, designed to showcase a game concept with a variety of different female characters. The story, themes and game mechanics are designed to supplement the character arc of the female hero. The project also attempts to be an example of how the representational problems can be averted.