DECKED! CHALLENGE (BODYWEIGHT) - A MODERNISED APPROACH TO HEALTH PROMOTION THROUGH THE UTILISATION OF MOBILE TECHNOLOGY 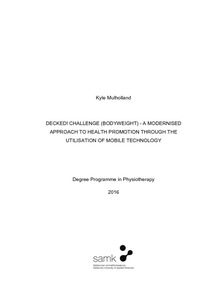 The growing incidence of Noncommunicable Diseases (NCDs) within modern society, for which physical inactivity represents a major risk factor, has generated significant public and professional attention. This recent emphasis placed on the reduction of NCDs and their associated modifiable, behavioural risk factors has resulted in increased focus on the promotion of physical activity. Additionally, research demonstrates a shift in mentality away from the pathogenic orientation of health promotion. This has resulted in the formation of health promotion concepts that actively promote health, rather than just being low on risk factors.

From a physiotherapeutic perspective, physiotherapists are uniquely skilled to make a substantial contribution to the promotion of health and physical activity, potentially easing the public health burden associated with NCDs. Accordingly, this thesis has presented research associated with the design, development and dissemination of a health promotion product. This health promotion product was developed to utilise modern resources and technology, to facilitate dissemination to multiple demographics.