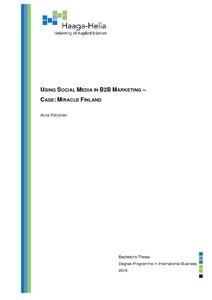 The goal of the thesis is to create a social media plan for Miracle Finland Oy. It is a small, Finnish IT company located in Helsinki. Social media plan is created because the company wants to increase customers’ awareness as well as improve own brand image.

Social media is popular since it gives the power to the audience. Especially in the recent couple of years the power has been shifting to them more and more. Instead of being passive receivers of information, people have realised that they can interact with companies in social media. This means that instead of being just advertised to, the audience wants to see content with value. This is what led to using the theory of planned behaviour as a guideline for writing.

Constantly rising activity in social media as well as multiple business to business marketing investments make social media channels the most sensible investment right now. Especially since the company does not want to use any extra money for marketing. The channels cho-sen for this thesis are LinkedIn, Twitter, and Facebook, since they’re the biggest channels and have the widest reach in Finland.

The case study has not been made public by the request of the company.