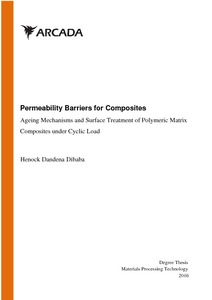 The thesis scope was to study and experiment the hydrolytic degradation of composite laminates under cyclic loads using different hydrolytic permeability barrier methods in short period of time. Four sample groups were prepared for the studies that were treated in two types of barrier methods; Aluminium foil reinforced and Durester CG spray paint. Experiments were performed on the Testometric testing machine for cyclic loading following placing samples in water container for hydrolytic mass up-taking inside an oven within a specified temperature. The process was repeatedly applied for a number of time and data’s were collected accordingly. After completing the experiment, results were studied and compared according to their physical degradation, Testometric cyclic loading data, and water up-taking masses. In addition, the role of lamination methods and cost effectiveness of anti-corrosive methods were included for analysis.
As a result saturation time for water up-taking was recorder at 127 Hours after the initial testing.
The slope changes of the final and initial tests graphs, retrieved by sample laminates prepared using vacuum bagging and embedded with aluminium foils was 32% in slope decline and recorded as the highest . On the contrary, Durester CG shows 13 % of slope declination in the cyclic loading test graph which shows better mechanical performance. Moreover, Durester CG shows a 1.73 % increase in mass up-taking which was better result next to treated glass fibre laminates having 2.88%. As a summery , Durester CG treated glass fibre laminates shows a better coating or barrier method of all the rest laminates that were tested.