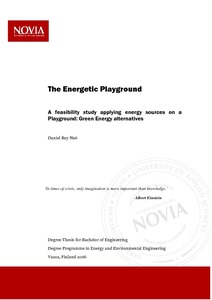 This thesis aims to study the feasibility of using energy generated by the physical activity of children playing in playgrounds. More particular, the goal is to generate clean energy by playing games and showing them the effort about how energy is produced.
The ease of turning on lights or using electrical appliance by simply pushing one button causes unawareness of the actual effort and negative impacts of the generation, transmission and distribution behind energy sourcing. The idea of this study arises from the concern of the damage that has already been caused to the environment by the excessive use of the main energy resources. The different prototypes presented in the following document are based on the mechanical swing operation, merry-go-round and the piezoelectric tiles; energy sources that are not typically utilized on this matter. The intention is the usage of human mechanical force, in this case the physical activity of children, to generate electric current, which would be stored, sent to the grid or used directly in parks at night or in surrounding houses.
The main idea behind this project is to change the view on energy generation in order to avoid further environmental damage. To ensure long-term success children must be well educated e.g.: by designing an educational municipal or local playground, where they can gain first-hand insights of the process of energy production while they are playing, losing weight and feeling good with themselves.