The motivational factors and popular destinations in volunteer tourism 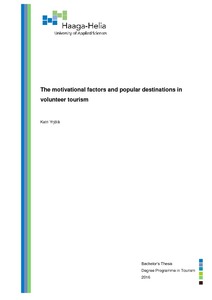 The report explains the theory behind the concept volunteer tourism, the voluntourist as well as explains two different motivation theories. The theory part also has data about the most searched and popular destinations when looking for a volunteering project as have been re-searched two years prior to this report.

In conclusion the research shows that the major part that answered the questionnaire and are interested in doing volunteer work were under 30-year-olds students. The results concerning popular destinations were in line with another research made two years earlier. These conclusions are that Asia is the most popular region where to do volunteer tourism, Africa the second popular and Europe the third.