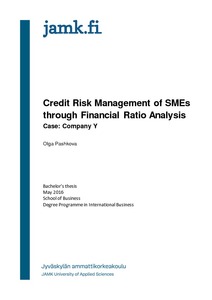 The objective of the thesis was to analyze the financial health of the case company and their preparedness to expand into international markets. Various financial techniques such as the financial ratio analysis and the Altman Z-Score were used in order to measure the current condition of Company Y. Small and Medium-Sized Enterprises are considered riskier than larger corporations. Therefore, various risks that SMEs encounter throughout their lifetime were also explored. In particular, the author focused on credit risks that are a subtype of financial risks.
For this research, the data was collected using a mixed-method approach, and the case study approach was used as part of the research strategy. The data on the company was acquired from the CEO in the form of financial statements of 2010 to 2014. The accounting data was carefully analyzed and then used for the calculation of the different financial ratios. Each ratio was carefully described and analyzed in relation to the background of the case company. For further robustness, the Altman Z-Score Model was utilized.
The results represent the dynamics of the ratios over the five-year period and the level of distress at Company Y. The results of the ratio analysis indicate that Company Y is, generally speaking, financially sound. However, some particular ratios should be paid attention to as they refer to unfavorable features. Furthermore, the Altman Z-Score Model result lies exactly between the figures for bankruptcy and non-bankruptcy. This indicates that the company, with regard to the important Z-Score result, might develop or go into reverse in the future. The usage of the results is limited to Company Y. However, the theoretical framework can be useful for other SMEs.