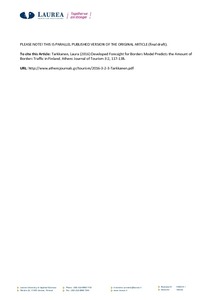 This paper describes the factors which have an influence on travelling and presents the forecast model to Finnish-Russian land border. The number of border traffic between Finland and the Russian Federation’s border stations has been an upward trend through the 2000s. A significant part of growth is due to increased travelling of the Russian Federation’s citizens to the European Union. Forecasting of cross-border traffic and tourism in Finnish-Russian land border has been based on the official statistics. Laurea University of Applied Sciences carried out a study which generates information on the factors that influence on border traffic. The research study is based on qualitative methods and co-creation tools. As a finding, the key structural factors are tourist’s motivations, service and infrastructure in border station, and travelling documents. Foresight for Borders model predicts the amount of border traffic which are based on the key structural factors. Foresight for Borders model will improve service at the border stations by providing information of the traffic amounts that are anticipated to cross the border during specified time periods. As a conclusion, the study can be stated to be necessary in terms of creating new approaches to border service, security and tourism studies.