Developing a Model for Change Management 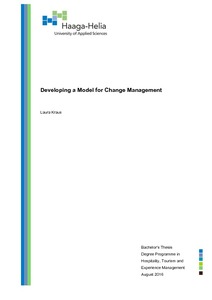 Half of change initiatives meets their initial objectives. Only 1 out of 4 organisations are able to sustain those gains of change over long-term, discovered by a study of Towers Watson. Nevertheless, the literature about change continuously grows. However, only a small amount of empirical evidence, supporting those suggested theories, is discernable.

The intention of this thesis is to provide a deep insight into the broad topic of change management. Driven by the high failure rate and small amount of empirical evidence, an answer to the research question of What should be taken into consideration when managing change? is aimed to be found. For supporting this goal, conceptual understanding of the thesis topic is firstly established, followed by the development of a change model characterised by extensive degree of current relevance based on literature review and improved by managers’ conceptions of change management. Potential success factors and pitfalls are likewise identified as a research objective of the thesis study.

To explore the complex phenomenon, semi-structured interviews and qualitative content analysis as part of qualitative research were applied. Managers, working in the service industry, were chosen as participants, whereby this sector is considered as demarcation. The duration of the study encompassed three months. Apart from perception of change, people involved and involvement, communication, leadership, framework and measurement were deduced as themes from data which were in turn used for improving the theory-based model.

Concluding, the research implies that it is impossible to fully control change by predefined, incremental change models, as a recipe for successful change management does not exist. Instead, understanding the complex and multifaceted character of change is decisive. Therefore, the developed model focuses on the most crucial components of change management which were abductively derived from both theoretical and empirical findings. Hence, it seems based on this research that they are more useful in today’s ever-changing business world, compared to the best practices promising the accomplishment of initial change objectives.