The Impact of Religious Tourism on Nepalese Economy 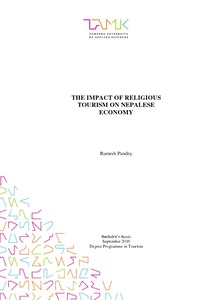 The research for this thesis was done through collecting secondary data from various sources and by collecting primary data through online questionnaire survey. A survey website was used as a tool to collect the primary data while all the respondents were approached through social media.

The research pointed out the impact of the religious tourism on the Nepalese economy. Furthermore, the primary data collection results showed travelers’ view about a religious trip. The amount of money we can expect from the random religious travelers and the services they look for are some key findings.