Managing Human Factor at the Fuzzy Front-End of Innovation 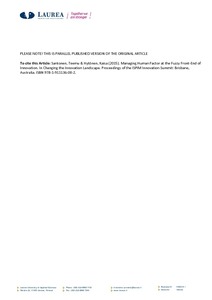 The fuzzy front end of innovation (FFE) is attributed to the early phase of the innovation process. Selecting the best ideas for further development is critical for business success. However, the existing FFE literature has mainly focused on the idea generation processes, whereas studies regarding idea selection processes are significantly less representative. By following cross-disciplinary research strategy, this theoretical and methodological concept development study identifies factors from psychology, behavioural sciences and neuroscience which can influence individual person’s decision-making process during the FFE idea selection stage. Moreover, we discuss the impact of the identified factors in incremental vs. radical idea selection processes in order to evaluate the possible differences between these two very different idea types. As a result it is concluded that radical idea selection process appears to be more systematically negatively influenced by choice biases whereas choice biases have more scattered influence on successful selection of incremental ideas.