Innovation as a Building Block of Success : Increasing the Competitiveness of Mindtrek 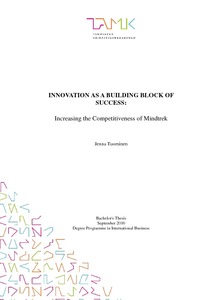 Mindtrek is a technology conference organised in Tampere, Finland. The 2016 conference consisted of five different events: Open Source World, Internet of Things Event, Mindtrek Immersion, Smart City Event and Academic Mindtrek. The main organiser of the international conference is COSS - the Finnish Centre for Open Systems and Solutions: a small non-profit organisation of seven employees. In 2016, COSS acted as the organiser of the event for the second time in a row.

The purpose of this study was to identify industry related critical success factors that might need further development. The objective of this was for Mindtrek to stay ahead of competition in the international conference scene and, thus, increase competitiveness and recognition. A central focus point needed to be found for the conference themes so as to make the central message of Mindtrek clearer.

The data were collected in two phases; by conducting an interview with the Executive Director of COSS, and during the second phase an anonymous survey was filled out by the employees who took part in organising the conference. Mainly qualitative data were used during the writing of this thesis.

During the interview with the Executive Director of COSS, it was found that the critical success factors the Executive Director wanted to further develop were all innovation related factors. Thus, the second phase of the study included a survey filled out by the employees in order to find out if the prerequisites for innovation were fully met at the workplace. The majority of respondents felt that they were not entirely sure of the vision and goals of Mindtrek, and they hoped for more logical processes within the organisation.

The findings indicate that the innovative abilities of the team could be increased by clarifying the vision and goals of the conference. This would help with finding a central focus point and deciding on the right themes. The results also suggest that the filing system in use ought to be reorganised in order to facilitate the flow of information between employees. Moreover, the innovation process should be paid attention to; problems or topics should be clearly defined before meetings and more time should be reserved for discussion.