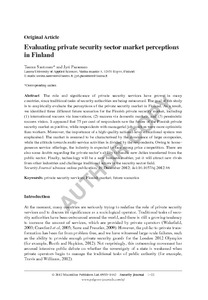 The role and signifi cance of private security services have grown in many countries, since traditional tasks of security authorities are being outsourced. The goal of this study is to empirically evaluate the perceptions of the private security market in Finland. As a result, we identifi ed three different future scenarios for the Finnish private security market, including(1) international success via innovations, (2) success via domestic markets, and (3) pessimistic success vision. It appeared that 75 per cent of respondents saw the future of the Finnish private security market as positive, while respondents with managerial job position were more optimistic than workers. Moreover, the importance of a high-quality national-level educational system was emphasised. The market is assumed to be characterised by the dominance of large companies, while the attitude towards multi-service activities is divided by the respondents. Owing to homogeneous service offerings, the industry is expected to face strong price competition. There are also some doubts regarding the private sector ’ s ability to handle new duties transferred from the public sector. Finally, technology will be a new business enabler, yet it will attract new rivals from other industries and challenge traditional actors in the security sector field.