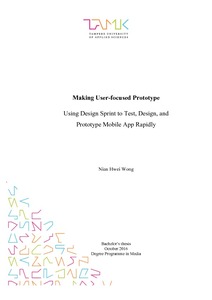 The aim of this study was to examine Google Venture Design Sprint (sprint) as a rapid design process and how it had helped to kick-start a design project in order to test, design and prototype for a mobile app in a large organisation. Based on the study, the objective of the practical project was to improve Vattenfall My Pages mobile app prototype based on the user test conducted during the sprint.

The sprint was conducted at Vattenfall Digital Channels to redesign My Pages mobile app. Observations were made during the sprint and analyses were recorded. Participants from the sprint were also interviewed. Apart from the sprint being experimented as a rapid design process, the rapid sketching and prototyping methods that are used during the sprint process were also studied. The theoretical section of the thesis examined the user experience design techniques used in the sprint. The practical part focused on the visual design improvements of a high-fidelity mobile app prototype based on the data collected from the sprint’s user test.

Throughout the sprint, it was found that the techniques used in the sprint provided effective and reliable ways to help design team to work on the mobile app design project that involved a large number of stakeholders. The rapid sketch method used in the sprint was effective in generating many sketch solutions which helped produce a reliable prototype. The user test had given valuable insights that helped improve the design from the users’ perspective. The sprint also provided a better process for a visual designer in designing a better prototype that is user-focused. It was also examined as an excellent team building exercise for designers working in a large organisation.

It would be interesting to continue using the sprint as a user experience design process and method to approach various design challenges including design for mobile app. The study suggests the sprint is a versatile method that could benefit designer working in a team to tackle design challenges that involve a large number of stakeholders. It also encourages the visual designer to take an active role in user experience design using the sprint to build design and prototype that is user focused, to better fulfil business requirements in a short amount of time. Furthermore, building a mobile app that fulfils the users’ needs and enhances their experience is something every designer and company that aims at creating successful digital products and services must aim for.