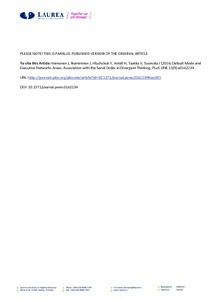 Scientific findings have suggested a two-fold structure of the cognitive process. By using the heuristic thinking mode, people automatically process information that tends to be invariant across days, whereas by using the explicit thinking mode people explicitly process information that tends to be variant compared to typical previously learned information patterns. Previous studies on creativity found an association between creativity and the brain regions in the prefrontal cortex, the anterior cingulate cortex, the default mode network and the executive network. However, which neural networks contribute to the explicit mode of thinking during idea generation remains an open question.We employed an fMRI paradigm to examine which brain regions were activated when participants (n = 16) mentally generated alternative uses for everyday objects. Most previous creativity studies required participants to verbalize responses during idea generation, whereas in this study participants produced mental alternatives without verbalizing. This study found activation in the left anterior insula when contrasting idea generation and object identification. This finding suggests that the insula (part of the brain’s salience network) plays a role in facilitating both the central executive and default mode networks to activate idea generation.We also investigated closely the effect of the serial order of idea being generated on brain responses: The amplitude of fMRI responses correlated positively with the serial order of idea being generated in the anterior cingulate cortex, which is part of the central executive network. Positive correlation with the serial order was also observed in the regions typically assigned to the default mode network: the precuneus/cuneus, inferior parietal lobule and posterior cingulate cortex. These networks support the explicit mode of thinking and help the individual to convert conventional mental models to new ones. The serial order correlated negatively with the BOLD responses in the posterior presupplementarymotor area, left premotor cortex, right cerebellum and left inferior frontal gyrus. This finding might imply that idea generation without a verbal processing demand reflecting lack of need for new object identification in idea generation events. The results of the study are consistent with recent creativity studies, which emphasize that the creativity process involves working memory capacity to spontaneously shift between different kinds of thinking modes according to the context.