KYKY Living Lab handbook for co-creation by schools and companies 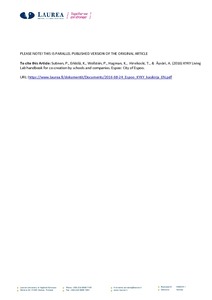 THE MANUAL
• describes Espoo’s KYKY Living Lab operating model for co-creation as well as the related key concepts, principles, rules and prerequisites, actors and their roles and responsibilities
• describes the co-creation processes and related decision-making points from the perspective of schools, companies and the Finnish Education Unit
• describes the co-creation processes as a flow chart (swim lane) that depicts the roles of all actors at the various stages (Appendix 1)
• lists the templates (including e-forms) used at the various stages of co-creation as well as things that should be taken into account in them (Appendix 2).