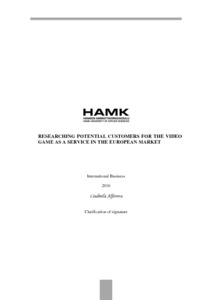 Apex Games Ltd is an independent game studio located in Tampere, Finland. Company is run by CEO Mikko Karsisto and believes in delivering high quality for the customers. Apex Games Ltd is in the middle of developing a video game called Demon Core. It is a tactical shooter with non-stop action, top-of-the-line graphics and compelling game play elements which are the most important parts for the developer.

The main objectives of this thesis were to find customers who are interested in the game, to determine what model would be the most suitable for the release of the game and to determine the pricing point for an intangible product in the form of a video game named Demon Core. Service marketing mix as well as questionnaires were chosen as a method to give recommendations based upon the prior research. Three questionnaires were made in the span of a few months to see the opinions of the potential customers of the product.

Based on the research and questionnaires that were made, recommendations on pricing and promoting the game were given to the team behind the Demon Core product. Furthermore, judging by the responses, some suggestions were made about the choosing of business model for the release of the game.