An Overview of Wind Power in Africa 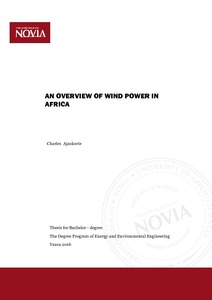 As society becomes increasingly more educated and environmentally-aware, demand for clean energy continues to rise. Africa hosts a significant proportion of the world population but as a whole, it is also severely under-energized. The subsequent high demand for energy and her growing middle class has created pockets of renewable energy markets around the continent. Private rooftop off-grid solar power is plentiful and much is already said about Africa’s plentiful sunshine, however, the discussion about wind and the development of wind power in Africa have been very limited.
This thesis study examines the nature of the current wind power market in Africa, precisely by looking at select markets around the southern (South Africa), northern (Egypt) and Western (Ghana) socio-economic regions of Africa. It sheds light on important completed, ongoing and planned wind power projects. It also reveals the principal market actors, but more importantly, attempts to discuss the main legislations and government programs driving or affecting the growth of wind power in the studied markets. Where possible, it identifies the nature of the tariff regime in place for independent power producers (IPPs) and investors; and discusses some of the main challenges inhibiting market growth. Finally, this study report summarizes and compares the characteristics of the studied markets against each other and from these, draw relevant conclusions about the state of wind power in Africa today.