Rebranding as a way to boost sales 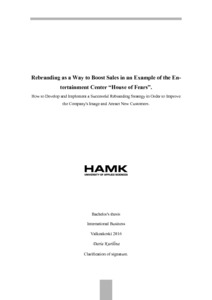 The purpose of this thesis was to develop a successful rebranding strategy for the entertainment centre “House of Fears” in order to improve the company’s image and attract new customers. To achieve this goal, the theory of rebranding was studied in depth and the different marketing research activities were implemented. Based on the primary and secondary data collected during the research, the recommendations were given.

Due to the lack of literature about rebranding, the theoretical background includes much theory about the branding. This part of the thesis covers such topics as the concept of brand equity and the asset dimensions of brand equity. Nevertheless, the drivers of rebranding, the rebranding process and strategies were described in details. All the data was mostly collected from the marketing books and articles. Such theoretical frameworks as SWOT and Porter’s 5 Forces were used to evaluate the current situation on the entertainment market of Saint-Petersburg and the position “House of Fears” takes there.

In order to provide high quality recommendations, the primary data was collected through the customer survey. One hundred visitors were asked to fill the survey, which aimed to clarify what image of the company the customers have in their minds. When the results were collected and analysed, a few recommendations were provided. All the recommendations were based on the theory studied in the first chapter and the results collected during the marketing research. The suggested rebranding strategy includes such activities as name and logo change, redesigning of the web pages and the interior, adding such services as a cinema, edutainment and a snack-bar. Besides, it was suggested to pay more attention to the development of the social media channels.

To make sure that the new strategy is going to be successful, it was suggested to perform a focus group meeting with customers of different ages, where all the changes could be discussed and tested. Thus, the needed corrections can be made before the new project is launched