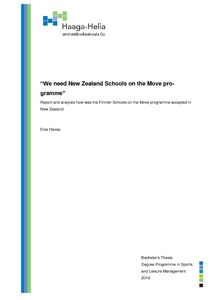 Finland has been identified as one of the top countries of education. Finnish Schools on the Move programme is one of the governments’ priority programmes and established currently in 76% of the Finnish comprehensive schools. The goal of the programme is to provide an hour physical activity daily integrated in the school day. The programme has been established in comprehensive schools and recently in the second level of education.

Actions based on the programme were implemented in Owairoa Primary School and Howick College in New Zealand. Three-month pilot was established in 2015, from September to December. The pilot included qualitative methods such as interviews, observations, diary, questionnaires and internet survey, which were used to estimate the acceptance towards the programme. In addition to New Zealand, the Finnish Schools on the Move programme has been trialed in Italy since 2015 mentored by the writer of the thesis. Experiences were used to combine the findings of New Zealand. Thesis is the first reported process including all planning, practical implementation, evaluation and suggested future directions regarding the establishment of the Finnish Schools on the Move in other countries.

The findings indicate that actions to activate the classroom time were feasible approaches in New Zealand. Active recesses were experienced as the area to focus on but it was challenged by the current structure of the school day. Commuting to school was identified a challenge to increase physical activity. Actions to increase physical activity were feasible to schools of New Zealand and Italy. However, by taking into account the core-principles of the Finnish Schools on the Move programme: given independency for schools and the schools have their own individual action plans. Identified challenges and success factors in implementation are compared between Finland, New Zealand and Italy.

Theory based on the findings suggest, that the Finnish Schools on the Move could be implemented in other countries by using same bottom-up approach as in Finland. Interest towards the programme has already occurred from several countries. Education of Finland is valued by foreign countries. Currently, actions to establish the Finnish education as an export business have been presented by the government. According to growing body of interest towards the Finnish Schools on the Move programme, possibilities of the programme as an export business are presented by the thesis. Benefits of exporting the programme are presented and as well as the suggestions for practical implementation.